With a background in artistic direction, Juliette has a taste for simple and stripped down aesthetics. Since 2009, she has been applying her skills to the digital art scene, creating connections and opportunities between artists, festivals and cultural actors. She collaborates with several international artists, touring their existing projects as well as developing and conceptualizing new creations. Since 2013, she is the head of Studio Joanie Lemercier, based in Brussels.

She also works as an associate curator for several festivals and cultural institutions, recently as guest curator for the exhibition of STRP festival 2019 in Eindhoven. In 2019 she co founded SALOON Brussels, a network for women working in the art scenes.

With the support of the Consulate General of France in Québec. 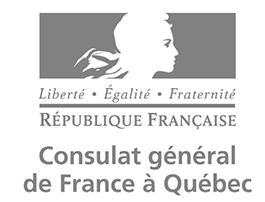 Québec and Canadian Artists at MUTEK Japan and Mexico
×